Home » Tips » What Is A Baritone Guitar?

Perhaps many people will not know what is a baritone guitar really? Is it a new instrument?

Where is it used? How?

Baritone guitars are actually more popular and popular than you can imagine. In this article, we will help you answer this question.

First, let’s take a look at the definition of a Baritone guitar.

What is a baritone guitar?

What is a baritone guitar?

The baritone guitar is a guitar with a longer scale length, typically a larger body, and heavier internal bracing, so it can be tuned to a lower pitch (according to Wikipedia )

That’s why you can tune this guitar to play in a lower sounding register.

A brief history of the Baritone Guitar

Now, it’s time to learn about the history behind the baritone. The first person who introduced the electric baritone guitar is Danelectro. He introduced this guitar in the late 1950s.

The guitar appeared in a wide range of 60’s surf music and background music used in many movie soundtracks, including spaghetti westerns. Nowadays, it’s easy to find baritone in all types of music.

Its voice can be able to stand out in the mix next to a standard guitar. Also, it allows you to cut through well above the bass.

Baritones were often used in Brian Wilson’s arrangements with the Beach Boys. They also are used in great songs performed by Glen Campbell such as Wichita Lineman.

‘Peter Gunn’ by twang-king Duane Eddy is a most famous baritone song, otherwise known as the Blues Brothers’ theme tune.

Ian MacKaye also used the guitar with his band The Evens. Moreover, baritones were used in Jazz guitarist Pat Metheny’s arsenal of guitars. In addition, these guitars were also used by Pat Smear of the Foo Fighters.

What is the difference between baritone guitars and regular guitars?

Normal, a Baritone Guitar tuned to B standard (B-E-A-D-F#-B, also known as ‘Baritone tuning’) or A Standard, which is a tone lower (A-D-G-C-E-A). That a baritone guitar is either a 4th or a 5th lower than Standard tuning.

Due to the low popularity, there are only a few brands like Gretsch, Fender, Gibson, Ibanez, ESP Guitars, PRS Guitars, Music Man, Danelectro, Schecter, Jerry Jones Guitars, Burns London and many other companies produce guitars in small numbers.

You can identify this guitar to any other guitar thanks to tunings, chords, and scales. A common baritone guitar normally comes with a scale of 28.5″.

Thanks to this scale, you can use heavier strings.

Moreover, it also allows you to tune down a 4th or 5th. Because of the relationship between the strings, you need to play all the same shapes for the scales as well as chords.

In addition, you can also use an alternate, for instance, DADGAD tuning from A to A as well as G to G on the outside strings. Its actual pitch is dictated by the gauge of strings.

According to Paul Heumiller, a long time baritone player, this guitar gives you an experience with a variety of strings.

Also, this guitar promises to give you a lot of colors as long as you are a recording artist or a performer.

Why should you use a baritone?

Once you take the trusty Fender and tune it lower, you surely find its strings too floppy. Actually, these strings are not have enough tension to produce a useable sound as well.

So, what’s the solution for this? The thing you need to do is making the neck longer. At the same time, ensure to use heavier strings. In fact, you have to make the scale length longer.

So, what’s this length? It’s the precise length of the suspended string. 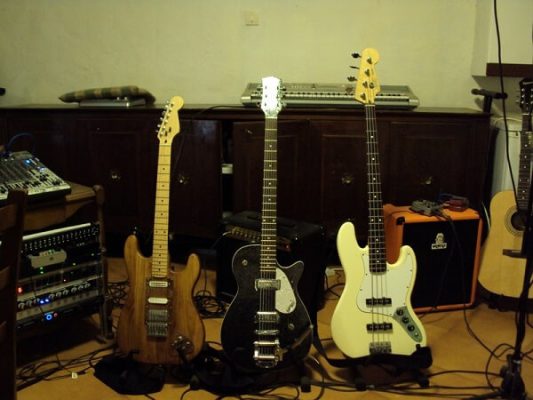 The baritone guitar is a guitar with a longer scale length

Most Baritone guitars offer a scale length from 27” to 28”. This guitar allows any guitar player to choose one and become an expert baritone player immediately

A Baritone Guitar is useful

Indeed, it’s the same to tune it as their standard guitar, just lower. That’s why every chord pattern is identical on the baritone.

For instance, if you want to play an open E chord on your guitar, you need to do exactly the same on your Eastwood baritone. So, it allows you to play any song you know.

How to Tune a Baritone Guitar

Actually, for Taylor Baritone 8-String and 6-String guitars, you need to tune them a perfect fourth lower than standard guitar tuning. The guitar needs a longer scale length as well as strings with a heavier gauge (27 inches instead of 25 1/2)

They have the purpose to create the baritone’s lower and deeper range. At the same time, it still can be able to maintain normal string tension. Like the standard tuning, these guitars come with the same intervals from string to string.

How to Tune a Baritone Guitar

And, the 5th string is similar to the low E in standard tuning. You shouldn’t tune the Baritone 8-String and Baritone 6-String to any pitches higher than the chart shown.

Indeed, this can make the tension increased on the guitar. As a result, this can also damage it.

To properly create the baritone’s lower, deeper range and still maintain normal string tension, the guitar requires a longer scale length (27 inches instead of 25 1/2) and strings with a heavier gauge.

The intervals from string to string are the same as standard tuning, but on a baritone guitar, the 5th string is the same pitch as the low E would be in standard tuning. The Baritone 8-String and Baritone 6-String should never be tuned to any pitches higher than the chart shown.

Doing so will increase the tension on the guitar, which could damage it. Through the article hope you have understood What is a Baritone Guitar? How to use it?…

If you have any further contributions, please leave a message to us. Thank you!

Humming a song or melody that you like is the most effective way to reduce stress for everyone. Everyone loves music and the guitar is arguably the easiest instrument to learn and approach.
Originated from a love of music and an interest in the guitar. Electricmelody would like to introduce some of my guitar tips and reviews to save you time and effort to pursue your passion for music.
Disclaimer

Electricmelody.com is a participant in the Amazon Services LLC Associates Program, an affiliate advertising program designed to provide a means for sites to earn advertising fees by advertising and linking to Amazon.com. Amazon and the Amazon logo are trademarks of Amazon.com, Inc. or its affiliates. CERTAIN CONTENT THAT APPEARS ON THIS SITE COMES FROM AMAZON SERVICES LLC. THIS CONTENT IS PROVIDED ‘AS IS’ AND IS SUBJECT TO CHANGE OR REMOVAL AT ANY TIME.

You can find out more about which cookies we are using or switch them off in settings.

This website uses cookies so that we can provide you with the best user experience possible. Cookie information is stored in your browser and performs functions such as recognising you when you return to our website and helping our team to understand which sections of the website you find most interesting and useful.

Strictly Necessary Cookie should be enabled at all times so that we can save your preferences for cookie settings.

If you disable this cookie, we will not be able to save your preferences. This means that every time you visit this website you will need to enable or disable cookies again.